We live in hectic times. The days just don’t seem to be long enough to accomplish everything that we must and want to do. Spending a third of every 24 hours asleep seems like a luxury busy people simply cannot afford. Cutting back on this idle time to get more done appears like the obvious solution. But is that wise?

Everyone has, on occasion, lived through the consequences of sleep deprivation and made the experience that they did not feel too good the next day. Performance is impaired, it is harder to concentrate, we’re forgetful and struggle to muster up enthusiasm. However, if we didn’t lose the whole night but just went to bed later than we should have done, the symptoms are subtler. In the UK, 20% of motorway accidents and up to a quarter of severe and fatal accidents are known to be the result of sleep deprivation. In 2020 a team of researchers compared the driving skills of participants under the influence of alcohol and when sleep deprived using a driving simulator. The scientists found that sleep deprivation had a more significant impact on driving performance than alcohol! Worryingly, they also discovered that drinking coffee did not improve performance, yet made participants think it did.

Of course, it doesn’t stop there. Sleep deprivation not only affects our mental capacities. It also negatively influences immune function, blood pressure and blood glucose control, appetite and weight, and the gut microbiota. In his book “Why we sleep”, sleep researcher Matthew Walker says: “Based on a rich, new scientific understanding of sleep, we no longer have to ask what sleep is good for. Instead, we are now forced to wonder whether there are any biological functions that do not benefit by a good night’s sleep.”

How much sleep we need each night changes over our lifetime, from 12-17 hours for babies and toddlers to 7-9 hours for adults. Contrary to popular belief, the elderly require just as much sleep as younger adults, but it can be harder for them to get the sleep they need. How long we sleep is one thing. It also matters when we sleep.

Scientists have identified sleep cycles – REM and Non-REM sleep – that take turns, starting with longer NREM phases at the beginning of the night and with REM phases becoming more dominant towards the morning. NREM sleep is the time for tissue repair and maintenance, the REM phase is the dream phase. If we go to bed too late, we shorten the NREM phase, reducing the opportunity for tissue repair, affecting our physical health. On the other hand, waking up too early cuts of REM sleep, affecting learning, memory, creativity, and mental recovery.

Two distinct processes control sleep, operating independently of each other: the circadian rhythm and the build-up of sleep pressure. The circadian rhythm is a built-in 24-hour clock that determines when we wake and sleep, which works even when we spend time in complete darkness, without external clues about night and day. It prepares us for sleep by lowering body temperature and the stress hormone cortisol while increasing the sleep hormone melatonin. The circadian rhythm controls the gene expression for body processes as diverse as hunger and thirst, mood and emotions, urinary volume, hormone release and the metabolic rate. Curiously, it even affects healing: Heart surgery patients recover better if their surgery happens during early afternoon, and wounds sustained during the night heal 60% more slowly than those acquired during the day. The cycle varies between individuals. 40% of people are thought to be “larks” – morning types, 30% are “owls”, and the remaining 40% find themselves somewhere in the middle. Larks appear to be happier and healthier and more satisfied in life than owls, but this may simply be down to the fact that our world is shaped for owls: work and school start early, but owls fall asleep late.

Sleep pressure is a chemical process that increases the urge to sleep over the course of the day. On waking, the neurotransmitter adenosine starts to build up in the brain. Levels peak after 12 to 16 hours, at which time we feel tired and want to sleep. During sleep, an enzyme metabolises adenosine, reducing levels so that we wake up refreshed in the morning when the cycle starts again. If we cut our night short, of course, there may not be sufficient time to clear all adenosine, causing us to be tired sooner the next day.

Sleep and the lack of it has a profound impact on every single body system, and it has been proven beyond doubt that it is not a waste of time. We need between 7 and 9 hours of sleep for optimum health, and no amount of “training ourselves to get by with 5 hours” will change that. A good night’s sleep is a necessity, not a luxury.

Of course, there are millions of people who would love to sleep for 8 hours a night – if only they could! If you struggle with sleep deprivation, read our next newsletter, in which we will share our top tips to help you sleep. It’s not too late to sign up! 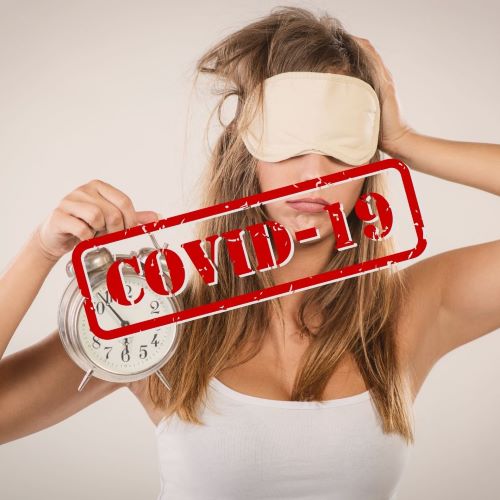 It certainly does, not only directly, in people recovering from COVID, but also in people whose lives have been turned upside down. Social isolation for months on end, fear of catching the Corona virus, worry about loved ones, and the fear of financial ruin are enough to keep anyone awake, even when they are not (yet) directly affected by the disease.

Unsurprisingly, neuroscientists researching sleep have noticed a significant increase in sleep disorders, such as insomnia to hypersomnia, night terrors and the misuse of sleep medications. Conscious fears of the contagion and its economic impacts are not the only cause though. Disruption of daily schedules, reduced exposure to sunlight (particularly in the morning), excessive daytime napping and the excessive use of electronic media (particularly near bedtime) all contribute to disrupted sleep patterns.

Sunlight is an important “Zeitgeber” (“time giver”) for the circadian rhythm, which is why exposure to it – especially in the morning – is crucial. If you are working from home, try building an early morning walk before work into your daily routine. Avoid afternoon naps, if possible, as this will reduce adenosine levels, making it harder to fall asleep at night.

Need some tips for a better sleep, they will be exclusively sent by newsletter. If you are not yet enrolled, you can use the below link.

What is Happiness by Finding Contentment?

You have Successfully Subscribed!

We use cookies to ensure that we give you the best experience on our website. If you continue to use this site we will assume that you are happy with it.Ok